If you’re an English Bulldog lover, you know they are a quirky yet lovable breed. But also, they have a tendency to be destructive. Namely — to their toys., but sometimes to other things.

In addition, bulldogs can also show a softer side to their favorite toys.

Have you ever heard of English Bulldogs suckling their toys? No?
Well, it’s definitely a bulldog thing. And believe me, it is CUTE.

Below I roundup and review toys that are recommended specifically for bulldogs. I go over durability, safety, enjoyment, and overall quality.

Because if you’re anything like me, nothing is too good for your bulldog. They deserve the best of the best, and top quality toys.

English Bulldogs like to suckle. And in case you have no idea what that means, think about how a baby sucks on a pacifier. Or a young toddler who sucks their thumb. Bulldogs do this type of thing as well. But they do it with their stuffed toys, or their blankets or beds.

This phenomenon has never been explained as far as I’m aware (or as far as I could find on Google.) But out of three bulldogs that I’ve owned, two have been sucklers.

Possibly because the third one was an Olde English Bulldog, instead of standard English Bulldog. Not sure why there would be a difference, but that was the case. And I’ve also seen multiple examples online where friends and acquaintances have posted videos or photos of their bulldogs suckling.

From my personal perspective, I think it’s related to when they were puppies and were feeding from their mamas. I believe it makes them feel safe and comforted. Because whenever my bulldogs start to suckle, they go into almost a trance-like state, and basically fall asleep while doing it.

Oh, and one other thing — it is sooo adorable to watch!!

And below is a list of the best toys I’ve encountered for bulldogs who want to suckle. They’ve been tried and tested by my dogs, and I’m sharing some of their personal favorites.

Second in line as a suckling favorite is this Multipet Swingin’ Safari Monkey. The hands and feet have squeakers in them, but no one tends to play with those parts of the monkey. It’s the monkey face that everyone is interested in. For some reason, this specific monkey is a sought after suckle toy for my dogs. We’ve gone through 4 or 5 monkeys, since our youngest likes to tear off his limbs. I do my best to perform monkey-surgery, but sometimes it’s beyond saving.

Multipet also makes a few different sized Lamb Chop plush toys. And we’ve purchased many. How many people actually recall who Lamb Chop is? Anyone born prior to millennial age will probably have a good recollection. Lamb Chop was created by entertainer and puppeteer Shari Lewis, who spent over 30 years performing for children on educational TV shows.

This zebra tug toy has a soft plus head, a crinkly body, and handles to play tug. You wouldn’t think this would be the best option for a suckle toy. But for some reason, my big guy loves to suckle on this one.

For English Bulldogs who love to chew, you need to find a durable, quality product to stand up to their powerful jaws. I don’t believe in giving rawhide bones to my dogs, because I’ve had too many way-too-close calls in the past. But I do really like the quality of Nylabone brand chew toys.

This crazy-shaped double bone chew toy is great for the English Bulldog who likes to move things around while they’re chewing.  There are four different areas to hold onto, for them to get the best gnawing grip.

And this saxophone crinkly chew toy is one of the funniest things I’ve seen. Plus  there is an English Bulldog on the actual packaging! The blue rubber part in the middle makes a crinkling or crackly sound as it bends. And it’s also hilarious to see my dog chewing on the top, because it looks like she is really playing the sax.

And this final Nylabone chew toy is a fan favorite in my house, because it’s shaped like a big jack — Like when you were a little kid, and played the game with the rubber ball and set of jacks. Well, this one is big enough for my dogs to hold in their paws, and chew to their hearts’ content.

Balls for Bulldogs Who Like to Chase and Play Fetch

This Babble Ball is a favorite for interactive play, especially when both of my dogs are feeling feisty. It’s a hard plastic ball with a voicebox inside, which is activated when it rolls around on the floor. There are different versions, but the one we have contains animal sounds. So as it rolls along, you’ll hear various Moos, Barks, Meows, Oinks, etc.

The Babble Ball comes in a few different sizes, so make sure you get the one that’s best suited for your dog’s size. We have the largest one, which is really about the size of a baseball. My smaller dog cannot fit it into her mouth, but my big guy can. Just be careful if you have a chewer, since the plastic is pretty solid.

This is a really fun one, especially if you have a bullie who likes to herd. Have you heard about a competitive sport for dogs called Treibball? It’s essentially training your dog to herd or push a large inflated ball into a net, like a soccer goal net. If you are in an actual competition, your dog will push 8 balls into a goal.

But this inflatable exercise ball has provided hours of outdoor activity for my dogs. They’ll run up and down the yard, pushing this huge ball as they go.

Here is a video from one of my English Bulldogs’ ball chasing excursions:

They had soooo much fun!!!

Here is a recent find that we all got a kick out of. An inflatable jumbo tennis ball. Because my big boy Gus loves playing with tennis balls, and can usually be found carrying one around in his mouth. Well not with this one! Once we blew it up and showed him, he basically went gaga over it. We used a regular ball pump to inflate it (like for basketballs.)

The Bulldog by ZEUS, Interactive Dog Toy for Large and Small Dogs

And this little guy I just had to get, since it’s a bulldog! Essentially, it’s a ball similar to the Babble Ball above. There’s a hard plastic ball with a voice unit inside. That ball is covered by this soft bulldog head, which remains closed with velcro. Also, the internal plastic ball has an on/off button, in case you ever want to power it off. It’s motion activated, and makes little whiny and barking noises, like your favorite bullie! 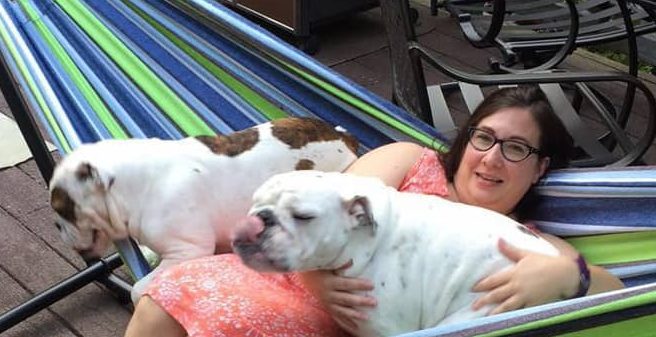